When gardeners hear the word fungus, they usually think of the ones that attack and often destroy plants, such as powdery mildew, black spot, rust, blight, and dozens of others. They can be bad news, for sure, and are often difficult to control. But there are a number of beneficial fungi out there as well, the most important of which are the mycorrhizae. 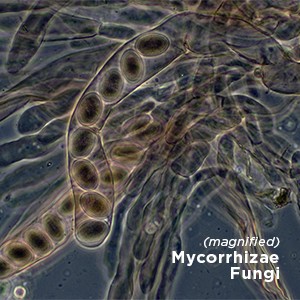 Mycorrhizae are specialized fungi that colonize plant roots. They are in effect extensions of a plant’s root system, whose threadlike filaments grow into the surrounding soil. And their relationship with plants is symbiotic: the mycorrhizae feed on sugars produced by plants, and the plant roots absorb water and nutrients through the filaments of the fungus much more effectively and efficiently than they would otherwise.

Most soils naturally contain some mycorrhizae (there are two main types and at least 150 different strains/species), which begs the question: Should you inoculate your soil with mycorrhizae?

I say yes, and for a variety of reasons. First, just because mycorrhizae occur naturally doesn’t necessarily mean they exist in sufficient quantities to benefit plants. Second, when soils are disturbed, especially through the use of rototillers, the mycorrhizae filaments are destroyed. Third, the use of synthetic fertilizers destroy the fungi. And fourth, prolonged dry spells can reduce their populations.

So just how do you inoculate your soil with mycorrhizae? It’s simple. There are a number of liquid and powder formulations that contain numerous strains of the fungi, and they’re great. But I think the best approach is to use potting mixes and soil conditioners to which the fungi have been added. That way you get not only the benefit of the mycorrhizae, but essential organic matter as well.

Use the potting mixes for container plants, and use the soil conditioners to topdress everything that grows, from lawns and landscape plants to vegetables and herbs. In garden beds, pull back the mulch and spread the soil conditioner around the base of plants. In veggie gardens, spread a layer at least an inch (or two or three) thick every month or so throughout the growing season.

Interestingly, there are some plants that don’t benefit from mycorrhizae, the most familiar of which include azaleas, beets, blueberries, broccoli, cabbage, cauliflower, and spinach. But that’s a short list, especially when you consider that up to 95% of all plants do.

6 responses to “Mycorrhizae — The Good Fungi”